Following the formation of TOOL teams in Quebec and Alberta, teams began in Ontario with a start in the Durham Region.  In the fall of 2007, the Durham I team was piloted by a dedicated couple, Joe and Diane Manuel from Buffalo, who made the 2-hour drive every month to pilot 6 young couples in Durham.
Joe and Diane then piloted Orangeville I in January 2009.  Once these two teams were established, teams were formed and piloted by couples in the growing Toronto Sector.  In the west end, Joan and Brian Barry piloted Oakville I in 2010 and Oakville II in 2011.  Durham II was piloted by Linda and Ryan Harlock in 2011 and Scarborough I was piloted by Monika and Chris Matelski in 2012.  These teams were considered part of the Buffalo Region until being officially placed in the Canada Region in 2010 as the Ontario/Toronto Sector with 6 teams, consisting of 30 couples, 4 priests and 1 deaconate couple.
The Toronto Sector’s first Sector Couple was Debbie and James Rodrigues, who worked hard to strengthen the fledgling sector, including establishing the tradition of Sector Family Events which were occasions for Teams families from Durham to London to gather.  Their term ended in 2013 and they were followed by Joan and Brian Barry until 2016 and then Monika and Chris Matelski until 2019.
These three founding couples had the task of overseeing an extremely large area with an growing number of teams and the Matelskis were at the helm as the Toronto Sector was necessarily and officially split into four sectors: Durham-Ottawa, Toronto, Mississauga-Hamilton & Kitchener-Barrie, thus becoming the Canada Central Area!
The first Responsible Couple for the newly formed Durham-Ottawa Sector is Ryan & Linda Harlock (part of Durham I) who have thoroughly enjoyed their journey in Teams of Our Lady thus far.  Having held positions of responsibility at the team level as well as concerning the Piloting of new teams, they are looking forward to the challenge of strengthening the Durham-Ottawa teams and establishing opportunities for those teams to meet & share as well as to continue working with the other sectors in Canada Central, East & West during their term of office from Aug 2019 to Aug 2022. 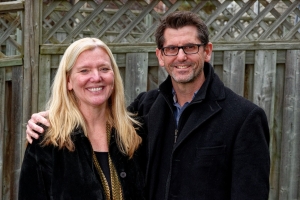